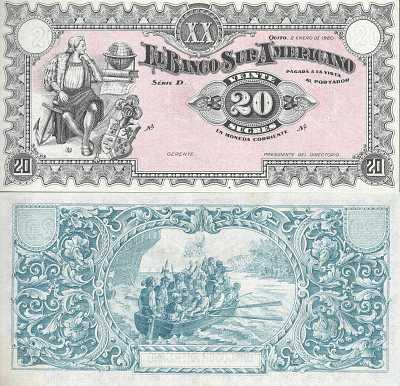 Seated Christopher Columbus with anchor, globe and arms at left. Men in rowboat on reverse. Banknotes of one and five sucres of the Banco Sur Americano were in circulation for a few days in the year 1920. Issued notes are thus quite rare. Reminders with no signatures/serial numbers are fairly common.

Little or nothing is known about the constitution of this bank, and even less about those who were members of its board, and what objectives its founders had at the time of creating it.

What is known for sure is that its founder and promoter was the Spanish citizen, doctor Rafael de Meza, who managed and had interests in an important group of commercial firms in the capital. Even though he had the financial support necessary to legally form the Institution, it is puzzling why he ignored the requirements of law, and proceeded to issue one, five, twenty, and one hundred sucres notes without any cash/gold backing as required by law. Despite this, he opened a bank in the city of Quito, which he baptized with the name of BANCO SUR AMERICANO.

After he opened the bank, he managed to circulate both one and five sucres notes, in which, as chairman of the board, a man named Abad signed and, as managers, two citizens whose signature is not legible. The Banco Sur Americano banknotes were printed on relatively low quality paper that would not be considered bank note quality.

The work AMERICAN LIBRE, edited and published by Mr. Carlos Manuel Noba, describes the closing of this bank as follows:

"... However, the Government that watches over the operations of this class of organization, demanded in accordance with a law of the Republic, the amount of cash reserves in gold that the bank should have.
Since the manager could not respond to this legal requirement, nor had the funds available, the Executive issued an order for the immediate closure and liquidation of the Bank."