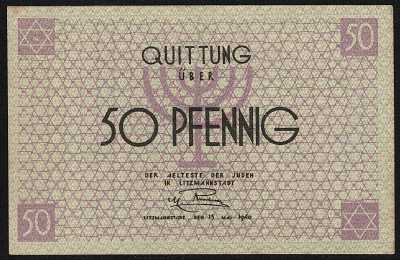 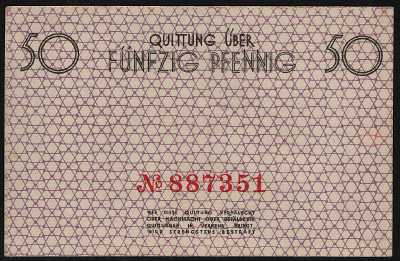 Lodz was the second largest Jewish Ghetto, renamed Litzmannstadt by the Germans to honour a World War I General. The ghetto was sealed off from other areas of the city in May 1940. The ghetto was liberated by the Russians in January 1945.
On back in black in: "WER DIESE QUITTUNG VERFÄLSCHT ODER NACH. / MACHT ODER GEFÄLSCHTE QUITTUNGEN IN / VERKEHR BRINGT WIRD STRENGSTENS BESTRAFT" which translates "ANYONE WHO FALSIFIES OR COPIES THIS RECEIPT, OR TRAFFICS IN COUNTERFEIT RECEIPTS, WILL BE STRICTLY PUNISHED"
Green lattice pattern work. Border of barbed wire interspersed with Stars of David. Interlocked stars with a large star in a circle. Serial number in red. Tiny security dot detail present on the banknote which was to prevent counterfeits. This is found within the Star of David inside the "o" of the 50 Rpf.

No folds but ageing tonal discolouration.