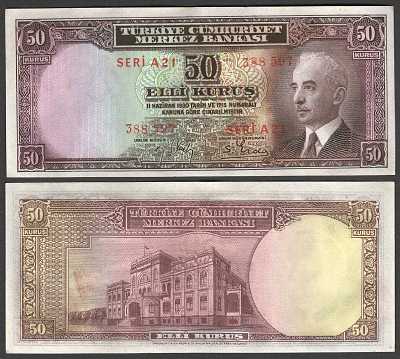 Small piece survivor of a bombing and a shipwreck. It is dated 1930, though as it includes the portrait of Ismet Inönü, President of Turkey between 1938 and 1950, it's obvious it was printed after that date. Actually, Bradbury, Wilkinson & Co. printed these banknotes for the Turkish government in 1940. Ellerman Line Ltd. shipped them and another batch of 100 lira banknotes printed by Thomas de la Rue, from England to Turkey in its vessel "SS City of Roubaix". The vessel docked at Port of Piraeus, in Greece, April 6th, 1941, the same day Germany invaded the country; worst, even, it docked adjacent to "SS Clan Fraser", that was downloading a cargo consisting of 250 tons of TNT. Alerted on the presence of the latter ship, Luftwaffe bombed the port that night, lighting fire on "SS Clan Fraser" which exploded at dawn of April 7th. The detonation was so massive that sunk both vessels plus nine more docked nearby, destroying and damaging buildings within a mile from the harbour. Part of the Turkish unissued notes blew up to the sky, falling into the city and the sea; local residents collected these notes and attempted, later, to trade them with their Turkish neighbours, whose authorities banned their use. After the war was over, Greek authorities retrieved what remained from sunken cargo and handled it to their Turkish counterpart, which destroyed the surviving notes in 1955. Signatures : Kemal Zaim SUNEL, Nedim ERSUN