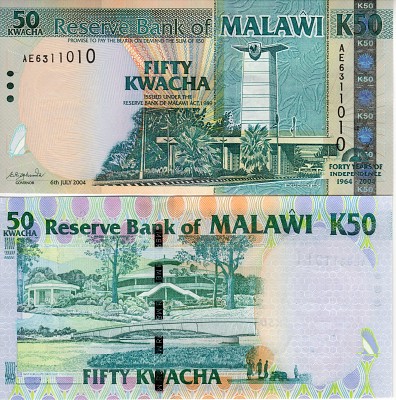 On the Coat of Arms at the top of the monument, there is a black cock depicted. This symbol had not been used for years, as an opposition political party had used it as their Party symbol. This was due to the printing company using an old photograph. It was later withdrawn from circulation.
Windowed security thread with demetalized RBM. Printed date of Independence Day on face by holographic stripe. Printer: Thomas De La Rue. John Chilembwe, who is featured in the watermark was a Baptist, Missionary, Malawi National Hero, Freedom Fighter. (1871-1915)