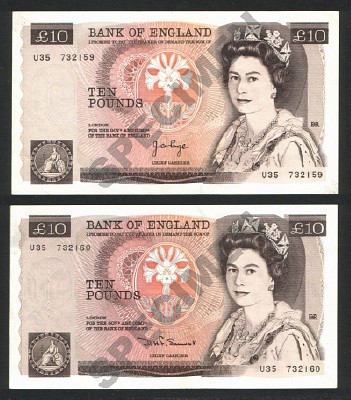 On 15 August an item was put up for sale on eBay which caused a frenzy of activity in the world of English paper money. It was a consecutive pair of Ł10 Series "D" notes with serial numbers U35 732159 and U35 732160, the former signed by J. B. Page and the latter signed by D. H. F. Somerset. Prior to this auction only two copies of the Series "D" Ł10 note signed by Page with the "U" prefix were known to exist, being cyphers U34 and U39, and neither had the benefit of a consecutive note with the signature of Somerset. It was clear therefore, to those in the know, that this auction was for a unique pair of notes.

The vendor was an elderly gentleman with no understanding of computers, who had asked his son to market the notes on eBay. He had withdrawn a quantity of Ł10 notes from his local bank in 1980 and being a coin collector and a philatelist, with an eye like a hawk, immediately noticed two consecutive notes signed by different chief cashiers. So he put them in an envelope and kept them. Over 25 years later he was turning out the contents of a bureau when he alighted on the long-forgotten notes. He knew they were good, thought they might make Ł200 and made that his eBay reserve. Little did he realise the feverish bidding activity which ensued. The reserve was met within hours and the price had risen to over Ł600 when the final day dawned on August 22. During the final hours the price burst through the Ł1000 barrier pausing briefly at Ł1250. Two bidders then went head to head in the final 10 seconds with Laurence Pope the elated winner.

Knowing the notes were unique, Laurence had two major concerns: were these notes in uncirculated condition as described; and what on earth should be his maximum bid? To protect his position with regard to the former, he emailed the seller and discovered he had no idea how to grade a banknote. So he asked the seller to examine the notes under a good light and report back on any defects. The seller only replied 15 minutes before the close of the auction, confirmed in his opinion that the notes were indeed flawless and very helpfully gave his phone number. With less than 10 minutes to go, Laurence phoned him and received an assurance that if the notes were not as described he could renegotiate the deal. Armed with this helpful attitude of the vendor, Laurence now had to decide on a maximum bid. The bidding had stalled for an hour or so at Ł1250 and Laurence knew he had to bid something like double that figure if he was to have any chance of winning the lot. So, he took a deep breath and with the top bid still at Ł1250 submitted a maximum of Ł2501 just 10 seconds before the close. To his delight he ran out the winner at Ł1705.55.

Later that evening the vendor phoned him to say he had been looking very carefully at the notes and thought he had discovered some minor faults. So he agreed to see Laurence at his Cambridge home the next morning. Laurence graded the notes EF-AU and the vendor readily accepted Ł1250. So the happy seller will treat himself to a holiday and the happy buyer has the extraordinary thrill of owning a collectible which can genuinely be called unique. Finally Laurence, as editor of the English section of Token's Banknote Yearbook, has confirmed he will include this unique pair of notes in the 5th edition due out next April.